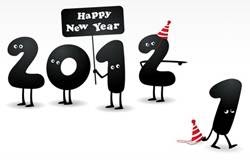 Right?!  I could not wait until 2011 was over.  I've been waiting since last October to get the year over with and usher in a new one. Welcome 2012 with all your freshness and new beginnings.  I literally felt a weight lift off of me when the ball dropped on midnight of New Year's Eve.

I actually took time off work and scurried to get my stuff straight by the New Year.  It dawned on me that 2011 was a year of helping others get their affairs in order so they could live stylish and free. However, I had forgotten about me.  Ooops...I committed the carnal sin of any profession. I was like your fave hairstylist that always looked a mess. Do you love and trust her still? Yes, because she is good at what she does!

With only 4 days before the New Year, I was determined to hit the ground running and I was going to get my Chaos Organized. 2011 had Mentally, Emotionally, and Physically been draining and somehow I related my clutter to my life situation as well.  If I'm going to get my life in order, it would start with my surroundings!

I cleaned out closets, garage space, tax stuff, computer files and even my kitchen! Piles upon piles of stuff was sorted, shredded, or sold on eBay and Plato's Closet.  I even did a drive by at Goodwill.  It may be a small thing to you, but I was so worried that I wouldn't complete my reassessment of life and clutter, and therefore would somehow be stuck in 2011.  I was fearful of something holding me back from Greatness in the New Year.....Maybe I wouldn't know where anything was OR I just would foster in the laziness from 2011 that would keep me from looking for it in 2012.


I have NOW adopted the term Minimalist.  I will kick clutter to the curb! If I don't need it or it doesn't hold some sentimental value to me, it's out!  We feel as humans the need to collect...STUFF.  We have to get out of that mode and live within our means and share what we have with others.  I feel Renewed.... Enough to start the New Year off worry and stress free.

Start your 2012 off right and get your home, office and life in order! I don't expect you to be like me...Be Better than me! Always Remove, Reuse and Redesign.